So, I’ve been having this problem with…um…with… (Hey! Is that a Chipping Sparrow at the birdfeeder?)…FOCUS. After a long (sometimes painful, sometimes exhilerating) struggle to complete my first novel, I’m ready to begin the next one. I have a bare-bones idea for the book, and I’ve been doing lots of background reading, but I just don’t feel quite ready to type the words, “Chapter One.” I want to know more about my characters and, especially, I want to know more about the conflicts that await them, the plot points that will make you, dear reader, want to continue reading. 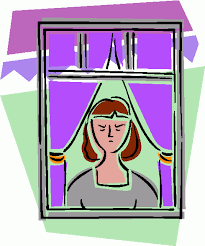 Let’s call this stage of the novel writing game, “pre-production.” You might wonder, what does a writer do with her pre-production hours? Well, speaking only for myself, I can tell you I spend a lot of time staring out my closet-office window.

Don’t worry; I’ve got a nice view from my closet. The pear tree in our front yard is in full, glorious bloom. And yet, you must understand that this is the hardest part of writing, for me, and so many other writers I know. Once I’m really grabbed by a project, once I know my characters and have a rough outline, the task isn’t quite so daunting. 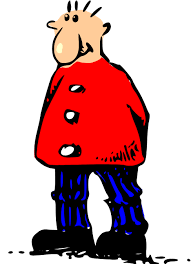 But now, my world of possibilities can send me into a panic on a bad day, or into pure space-out mode on a good one. Most days, I’m spacing out, while looking out my window, or worse. I’ve spaced out on a rare “date night.” My husband knows the look, knows to stop talking while I eavesdrop on another table’s conversation or try to decipher the waiter’s tattoo. Somehow, something around us is connected to my story, and I’m trying to connect those dots.

Lately, nearly every moment I’m thinking about my story, a little man pops into my head. I call him Paul S. Don’t ask me what the S. stands for; I don’t know yet.

I also really don’t know what Paul S. looks like. Sometimes, he’s quite fetching. Sometimes, more like the clip art above. Until fairly recently, I’ve been too busy thinking about my primary character, Ginny, to worry much about Paul S., who was simply going to be a person Ginny interacts with at her job.

But as the days and weeks pass, as I freewrite and freewrite, adding stray thoughts and dialogue to one big computer file, a shocking thing has happened.

Paul S. got pissed. You see, Paul S. doesn’t, apparently, want to be just a secondary character. First, he demanded equal time with Ginny. To appease him, I decided that it might be interesting to do alternating points of view (my last book had a single, first-person narrator).

But that didn’t satisfy old Pauly. No one cares about Ginny, he whispers into my ear. Stick with me.

Now what’s a writer to do when a little man keeps speaking inside her head, demanding to be the center of attention in her book? Anyone else might seek psychiatric care. But me? Sigh, sigh…Paul’s beaten me. I’m going to let Paul S. have a go at this, if he thinks he’s so freakin’ great.

I may regret it. I may drop him quickly and go back to my original plan, leaving him a walk-on role at best. But if I’ve learned anything in the years I’ve been writing, it’s this: you must gives pages to those characters who will not leave your mind. They have something to say, and if they are so forceful about saying it, it’s probably worth writing down. He probably has a story that people would like to read.